I learnt a new medium along with the students from an expert and that was exciting for me.

At Remuera Intermediate an extension programme was designed to enable a group of talented year 8 art students to learn from an artist a new process and techniques for making a bronze sculpture, 'Arch', aimed at enhancing the school environment. The structure was made by the artist and embellished by the students own bronze plaques, each student making three or four different 90mm x 170mm low relief bronze plaques. The students were given the opportunity to discuss their own pathways through the process and decide on which symbols and patterns to use that best reflected their own multi-cultural environment. Students worked on the project twice a week over the ten weeks. Each session was two hours long.

The students began the programme with a PowerPoint of several New Zealand sculptors' work including Terry Stringer and Karen Walters. They then visited the Auckland Domain Sculpture trail for motivation. Christine Hellyer and Charlotte Fisher supported Richard in explaining the concepts underpinning the work. Students then chose a site in the school environs where their final collaborative sculpture would be installed.

Students discussed ideas and used their workbooks to draw a range of symbols and patterns that they felt best reflected their environment, their own culture and beliefs, generally with a Pasifika theme. Students also selected a New Zealand sculptor to research and study. Selections were made from their drawings which were then drawn to scale in order to facilitate the transfer to the mould size. 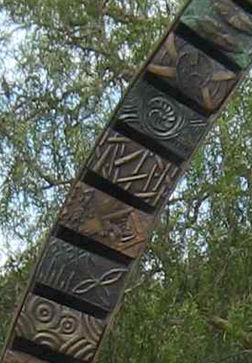 Detail of the finished plaques.

Detail of the finished plaques.

Preparations were made for working in three dimensions as students constructed boxes for clay/plaster moulds. They were then shown the technique of pattern moulding and sand-casting. A PowerPoint about the workings of a foundry placed what they were learning into context and helped students to also appreciate the large scale involved in some works.

Following this, students produced their own series of sand-cast moulds, cast them with wax and these in turn were cast in bronze at the foundry. The bronze plaques were burnished and polished and joined with Richard's wooden structure to make a two-metre high bronze archway. The students, whanau, teachers and friends celebrated the unveiling of the stunning archway as the outcome of their efforts.

The selected students were highly motivated and as a group they bonded together well. This enabled them to challenge each other through discussion, thinking, risk-taking and problem-solving within a new medium. The programme offered an extension in learning for those identified as gifted and talented across a number of learning areas.

The students became immersed in the project learning new techniques and ways of working in a collaborative manner. Participation while managing themselves and relating to others was an integral part of the process. They gained a sense of who they were within their own culture and beliefs and learned to bring their cultures together towards a common outcome. 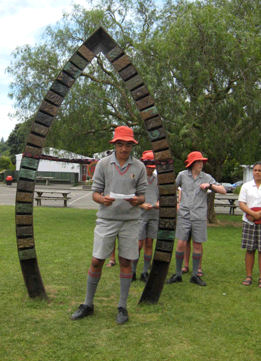 A student makes a speech in front of the finished archway.

A student makes a speech in front of the finished archway.

Students developed their knowledge base about sculptural practices by meeting artists, viewing installed works and discussing their context in relationship to the environment, scale and use of materials.

They gained an understanding of the planning required for a large project and how it was necessary to break the project down to small achievable steps.

Students discovered the advantages of keeping a sketch book and how ideas can be developed by being able to reference old drawings, part of the art-making process that will aid them in future art studies.

The students learned the age-old process of plaster mould-making, which lead to the wax ceramic shell and finally to the bronze casting. This gave them the skill of being able to work between positive and negative versions of the design. They learnt the joy of persevering with a process (carving into plaster) to achieving results often far better than they expected.

They were exposed to the practice of a professional sculptor and realised that art making is an industry that gainfully employs people. The students will now have an idea of how an industrial foundry works.

Valuing diversity in their own and others' cultures was the concept behind the plaques, and, in the course of making this collaborative work, the students learned to participate for the common good.

All of the key competencies were involved to some extent in the completion of the project. Creative and critical thinking was required to develop their ideas and they used symbols relevant to their cultural identity. Participating and contributing to the collaborative project involved students in relating well to others while managing their own plans and progress.

All four strands of the Visual arts curriculum were integrated: Understanding the arts in Context, through meeting artists and viewing sculptures in their specific contexts; Developing ideas; Developing practical knowledge, through the process of designing and making their plaques; Communicating and interpreting, as students discussed the artists works and explained their own work in progress.

The students selected were identified as gifted and talented in visual arts, but many were also gifted in other learning areas of the curriculum. Some of the students were responsible for regularly uploading photos and writing commentaries of the process for the school intranet. Other students interviewed the artist, and made speeches at assembly and at the final celebration. Their ideas and experiences were transferred into their literacy learning in English by developing their skills as 'effective oral, written, and visual communicators who are able to think critically and in depth'.

Science: Students developed understandings of the composition and properties of matter, the changes it undergoes, and the energy involved. The molecular changes in materials such as clay, wax and plaster and the effects of temperature and humidity were studied.

Students' commitment was boosted by the perception that, along with the teacher and artist, they were all working towards making something for the school to be proud of. The project also had the full support of the school and parent body.

Documentation of the project; a video, photos, interviews with Richard the artist and the other artists involved, was accessible on the school website. Sharing this with their school community enabled the students to be recognised for their achievement and the community to have an insight into what they have achieved. The community will be able to see and enjoy the sculpture in the school grounds for many years to come.

The artist noticed that with a small group of same-age students there was a very sociable aspect to the group with students very willing to be involved and assist others. The project worked well because problems were faced by all, so the group was able to resolve things immediately and move on to the next stage. The students' enthusiasm and commitment was sustained by the pace of the programme which provided achievements at each stage so there was always a sense of progress.

It was great to see these young sculptors grasping a process, refining it, manipulating it and achieving results beyond their expectations. This was very satisfying for me as an artist.

As an art specialist teacher it was exciting for me to learn a new medium from 'an expert' alongside the students.

The NZ Curriculum states as its vision for young people that they are confident, connected, actively involved and lifelong learners. Realising this vision was an integral part of this project as all the children involved were actively involved in music making and had multiple opportunities to relate to adults and their peers in an innovative and creative way. The experience set high standards for the children of what they could achieve with dedication and life-long learning.

The values in the NZ Curriculum found real expression in this collaboration with Julian and Strike. The students aimed for excellence in their performance, were introduced to a diverse range of cultures through song and developed a strong sense of community while working together towards a common goal.

In developing the key competencies the students related to others as they listened, kept open to new ideas and shared their thoughts. They developed skills of co-operation and tolerance, managing their own behaviour and setting high standards for their own contribution.

All four strands of the Music - Sound Arts Curriculum were encompassed through the learning. Students learned to: Understand Music - Sound Arts in Context; Develop Practical Knowledge as they learned to sing and play instrument; Develop Ideas as the worked to create their own music; and Communicate and Interpret music of a range of cultures for performances.

The artist's expertise and commitment to the project meant that we came out with an amazing sculpture for the school. Richard was an excellent choice of artist. His ability to work well with the students and adapt to the everyday school programme was amazing. I would definitely try a similar idea on a smaller scale at a later date.