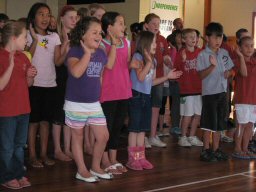 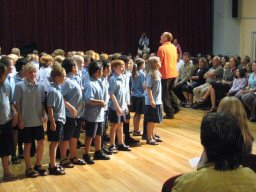 "I had not quite imagined, nor was prepared for just how wonderful this meeting of professional singers and school children was to be." Julian Raphael, Ensembles in Schools Education Facilitator

Binding these strands together is a strong commitment to New Zealand music and musicians, which has led to many specially commissioned works from New Zealand composers and the promotion of New Zealand performers.

About the project and schools

In consultation with primary school principals, Chamber Music New Zealand selected three Masterton primary schools to participate in the Artists in Schools project - Ensembles in Schools. The timeline for this project extended over five months, with a central residency by Australian vocal ensemble, The Song Company, and community events featuring The Song Company. This occurred from November 17 to 21, 2008.

There were four components to the project: professional development for teachers, live musical experiences for students - centred on participating in singing, resource development and utilisation, and project evaluation and assessment.

Funding for the project was sought from different sources. The major funders included the Ministry of Education's Artists in Schools initiative, Eastern and Central Community Trusts, the Deane Endowment Trust, The Australian High Commission; the McCarthy Trust and private donations.

MNZ appointed Julian Raphael, a nationally recognised music educator, to act as the education facilitator for Ensembles in Schools. His role was to go into the classroom and work alongside teachers and students to give an exciting hands-on musical experience. Set alongside the classroom teaching was the desire to assimilate a high-quality performance experience in the form of a public music event that would celebrate the accomplishments of both professional musicians and students. CMNZ had secured Australian group The Song Company to be the ensemble in residence in 2008, and looked to capitalise on their reputation as a first-rate vocal ensemble and their many years of experience working in schools. During a residency week, The Song Company went into classes and worked with groups of students. 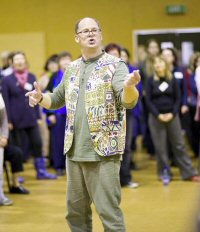 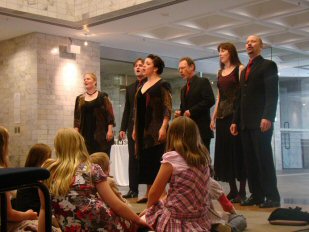 Relationship to The New Zealand Curriculum

The Ensembles in Schools project was designed to align with the values and key competencies of The New Zealand Curriculum, as well as fitting in with levels 1-4 of music-sound arts in the Arts Learning Area. In addition to the musical experience for the students, an important goal was to give teachers the skills and new ideas to assist in the facilitation of music learning as a regular part of classroom curriculum activities.

The aims for the students were essentially to:

After an initial meeting with the music teachers from each school, arrangements were made for Julian to meet with classroom teachers to talk through the project and establish dates for classroom sessions. In these early stages of the process, it quickly became apparent that the schools had very different needs and expectations. It was in this respect that the flexibility of the Ensembles in Schools project proved most useful and robust. The final structure was as follows: 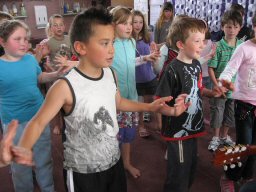 The primary objective for student participation was to give children the opportunity to learn fundamental music skills (rhythm, pitch matching, and an understanding of the cultural context of music) in a fun and stimulating way. The strategy was to bring musicians off the formal concert stage in order to meet the children at their level. Repertoire used in the classes was derived largely from "Vocal Fun", the resource book compiled by Julian for the project, and featured a range of multicultural action songs, part songs, chants and activities. Teachers noted that although there was a little initial skepticism on the part of some students (especially older boys), they quickly joined in once they saw how much fun everyone was having.

Changes noticed in the class community

"What a beautiful way to lay the foundation for active musical participation and appreciation on any level." Roland Peelman 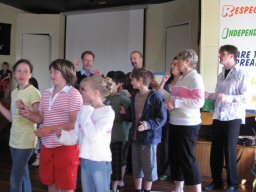 Ensembles in Schools sought to break down the perception that teaching music in the classroom requires years of specialised training, and that teaching music should be left to "professionals" by having the Education Facilitator working alongside the teacher in the classroom setting, providing simple and effective musical activities that did not require specialised music training to deliver. Having several sessions in their class allowed the Education Facilitator to build the teacher's confidence, gradually handing over the leadership of musical activities to them.Teacher feedback notes that the programme offered enough flexibility for them to tailor daily musical activities to fit their teaching schedule. Another positive outcome was the enthusiasm they showed in bringing together teachers from several schools to share their experience and to support and mentor each other. All the teachers involved in Ensembles in Schools responded eagerly to the idea of mentoring other teachers and working to develop a stronger musical community in Masterton.

"The whole experience was like a breath of fresh air. We all loved it." Maggie Jefferies, Teacher

In addition to enhancing the classroom experience, a key strategy of Ensembles in Schools was to provide opportunities for students to work with and perform alongside professional musicians. In addition to students learning from the musicians, it was hoped that there would be a two-way exchange of musical ideas with the students performing to and inspiring the visiting artists. Feedback from the teachers, students and The Song Company show that this goal was achieved with great success.

Unfortunately, a clash with another school event prevented Douglas Park from taking part in the evening concert. It was decided, therefore, to hold a special full-school music event at Douglas Park on the morning of November 21 to which parents were invited.

At 6pm on Friday November 21st, the students from Lakeview and Hadlow came together in the Masterton Town Hall in preparation for the evening concert. For most of the children, this was their first experience of a "real" concert and the air of excitement was palpable. However, a number of children from Lakeview (about 40) who had been part of the project and attended the Friday workshop did not in fact come to the concert. Feedback from the teachers suggests that parent apathy played a large part in this aspect. Strategies for overcoming this issue must be considered for future projects.

The material selected for the evening performance consisted of music prepared in the classroom as part of Ensembles in Schools and sung by groups from each school. Some combined items brought all the performers together, and there were even items that featured audience participation. In addition to performing their own repertoire, The Song Company performed alongside the school children with pieces that they had learned in classes during the residency week. The concert itself was a huge success with over 300 parents and family members in attendance.

The future of Ensembles in Schools

An encouraging outcome of Ensembles in Schools is the feedback that CMNZ has received from teachers and school support staff observing how children had been heard singing the songs in the playground and teaching the music and actions to peers in other classes. As such, the project has contributed directly to the growth of a musical culture within the community of each school. One letter received from a student noted, "my favourite song was the train one. My mum, dad and my sister tried to sing along. My dad sang along while he was videoing." In this respect, the music of the project can be seen clearly to have reached outside of the classroom to touch families and the wider community.

Ensembles in Schools has generated a buzz at Hadlow, Douglas Park and Lakeview schools that has spread to the wider teaching community. CMNZ has received numerous requests to continue the programme in 2009, working with more teachers from each school and bringing in other schools. In line with their objectives, the teachers who experienced Ensembles in Schools in 2008 are keen to work with CMNZ to promote the project and mentor other teachers who want to be involved. Also, CMNZ is working on ways to incorporate instrumental ensembles in to the model.

By bringing together a number of people and organisations with specific skills and interest in music education, CMNZ has demonstrated a model that successfully enhances the delivery of music in primary school classrooms as part of the daily curriculum. In addition to offering students a musical experience that they'll remember for a long time, Ensembles in Schools has provided teachers and musicians with much needed professional development. Ultimately, this will foster stronger and more frequent high-quality music education in our schools and communities.

"This is just to say that you are onto something important and, ahead of Australia in that respect! Congratulations." Roland Peelman