Resource A: Copy of Catalogue Entry for Auction Of Kuia Toby Jug 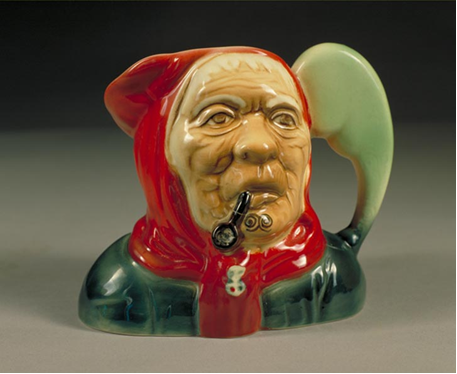 A ceramic toby jug in the form of a Maori kuia made by Titian Studio in the 1950's. It is an example of the work of the Browns - Cameron and Dorothy Brown which reflected the values and images of New Zealand and New Zealanders in the 1950s by producing decorative mugs, tankards, plates, lamp bases and other items that depicted themes from rugby to scenery, native birds and trout.

The piece illustrates the adaptation of the toby jug tradition to a New Zealand setting. Toby jugs are sometimes called fillpots, both names taken from Toby Fillpot, the inebriated character in the 18th-century song 'Little Brown Jug', developed and popularised in England around 1762. The first jugs generally had plain handles but these developed to reflect the character depicted, for instance a jug for highwayman Dick Turpin had a gun for a handle, and one for Long John Silver, a parrot.