The Sounds of the Sea

The students are taken on a learning journey through the world of a trumpet shellfish. They consider their strengths, some goals for future learning and some ways to help overcome fear when learning new skills. They use new skills to become a choir, seaweed, sunken ships and trumpet shellfish as they create an underwater sound and movement performance.

Focus for the Unit: What helps us learn?

Students will be encouraged to value excellence by working towards the attainment of selected movement skills using a process of attempting, rehearsing, receiving feedback and more rehearsal. They will explore aspects of the marine environment through a range of vocal and movement activities, think critically and creatively, and work together to create and participate in a short performance.

Managing Self
Students will explore vocal sounds and perform these with others in a 'sea choir'. Students will be encouraged to use safe dance practices around others and to develop an awareness of how their actions can affect others. By participating in a range of dance activities, students will develop their co-ordination, flexibility and agility, and an awareness and control of locomotor and non-locomotor skills.

Relating to Others
Students will be encouraged to watch others work, and to comment on this work in a positive and productive manner. They will work together to create short vocal works and dances.

Developing Practical Knowledge in Dance (PK)
Students will explore movement with a developing awareness of the dance elements of body, space, time, energy and relationships.

Developing Ideas in Dance (DI)
Students will improvise and explore movement ideas in response to a variety of stimuli.

Communicating and Interpreting in Dance (CI)
Students will share dance movement through informal presentation and share their thoughts and feelings in response to their own and others' dance.

Brief Notes About Shellfish
Shellfish are marine animals belonging to the mollusc group.

Gastropods or Univalve Molluscs
These are single shelled animals such as sea snails, sea slugs and limpets. Paua belong to this group. Most gastropods have features that include a head, a muscular foot for movement, eyes and a radular (a rough belt-like tongue for rasping food). Many also have a disc (operculum) attached to the foot, which acts as a cover when the shellfish requires protection inside the shell. This is also known as a cat's eye.

Bivalve Molluscs
These are shellfish with two hinged shells. Most edible New Zealand shellfish are bivalves. Some have two identical shells, such as mussels (kuku), tuatua and pipi; while others have one curved and one flat shell, such as scallops (tipa) and oysters (tio). Bivalves feed by extending a pair of tubes (siphons) into the seawater. One siphon takes water from the sea, which is passed through the gills where the nutrients and oxygen are filtered out. Wastewater is then returned to the sea through the other siphon. 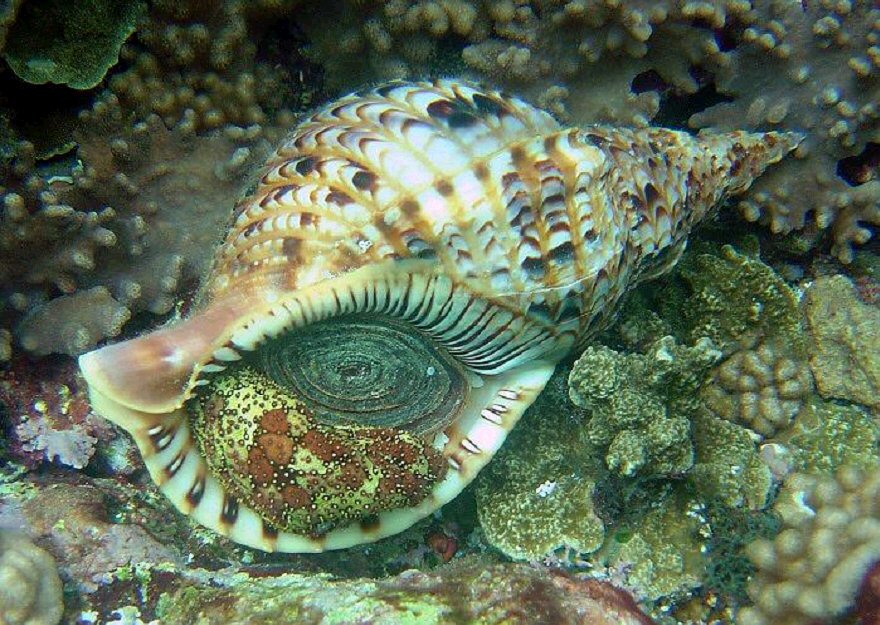 This is an image of a Pūtātara (shell trumpet) made from the shell of a triton (Triton australis) in about 1800. One end of the shell has been neatly cut off, leaving a small aperture for trumpeting. This aperture has a carved, wooden mouthpiece affixed to it and secured in place with what appears to be harakeke (New Zealand flax). A plume of feathers is attached by a harakeke thong and is used for carrying or hanging up the trumpet. The shell measures 23 cm x 110 cm x 11 cm and is from the Museum of New Zealand Te Papa Tongarewa.

Educational Value
Pūtātara are shell trumpets that produce a wide range of sounds. They are played to mark special occasions such as tangi (wakes) and ceremonies, as well as to signal an arrival at the marae or the birth of a child. Such trumpets were also used during wartime as a call to arms or to warn off approaching enemies. This example of a Pūtātara is made from the triton shell. These shells are not native to NZ and are only found when washed up on the beaches of the Far North. Consequently they are regarded as a special gift of the god, Tangarora (god of the sea) and are highly valued within Māori culture. Pūtātara were the possessions of chiefs and were often preserved as family heirlooms. As triton shells are very rare in NZ, Pūtātara were often made from the more commonly found shell of the small native conch (Charonia lampas rubicunda). The conch trumpet is a common instrument throughout the Pacific, but Māori are one of only a few groups who attach a carved, wooden mouthpiece to it, thus making each Pūtātara unique and highly valued. The example illustrated is a taonga Pūoro or Māori musical instrument. Resurgence in the manufacture and playing of taonga Pūoro in recent years is helping to ensure that this living art form survives into the future. This particular instrument is 'unprovenanced'. That is, its place of origin or proof of past ownership is unknown. With the arrival of Europeans in NZ during the 19th and early 20th centuries many taonga (Māori cultural treasures), including this item, whose stories were a key element in the transmission of cultural values between generations, were acquired by collectors, ethnographers and naturalists; the names and stories of these items were not recorded and have therefore been lost in time. 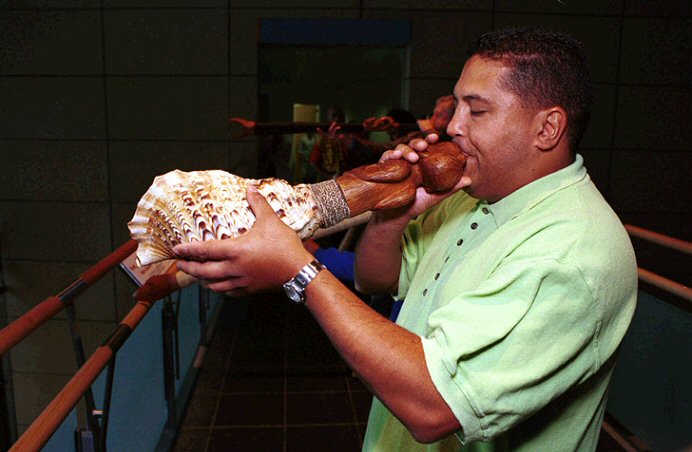 Description
This is a Pūtātara (conch shell trumpet) being played by the Māori musician and carver Bernard Makoare.
The Pūtātara is made from a triton shell (Triton australis) with a wooden mouthpiece lashed to the shell's narrowed end. The mouthpiece is carved as the upper body of a human figure, with the upturned mouth as the hole for blowing. Bernard is seen in close-up playing the instrument, on a bridge in the atrium of the Museum of New Zealand Te Papa Tongarewa, Wellington. The photograph is from the Museum of New Zealand Te Papa Tongarewa.

Educational Value
The asset shows a contemporary Pūtātara, made to a traditional design. The Pūtātara is one of many taonga Pūoro (Māori musical instruments) that fell into disuse after the arrival of Europeans in New Zealand. However, a resurgence of their manufacture and playing in recent years is ensuring their survival.
The Pūtātara produces a wide range of sounds and is used on numerous occasions such as tangi (funeral ceremonies) and other ceremonies, as well as to signal an arrival at the marae (communal meeting place) or the birth of a child. These trumpets were also used during wartime as a call to arms or to warn off approaching enemies.
This Pūtātara is made from a triton shell, which is not native to New Zealand. They are occasionally found washed up on beaches in the Far North. Consequently they are regarded as a special gift of Tangaroa (god of the sea) and are highly valued among Māori. They were the possessions of chiefs, and often became heirlooms.
Although Māori are one of only a few groups who attach a carved, wooden mouthpiece to the conch trumpet, Pūtātara are found throughout the Pacific. Each instrument has a unique sound, and groups of people - say those approaching a village - could be identified by the call of their Pūtātara. The trumpet is played by a renowned maker of taonga Pūoro, musician Bernard Makoare of the Ngati Whatua iwi (tribe) of North Auckland. He has been researching and creating the instruments for two decades, but says information on them has been hard to find because early missionaries suppressed their use. Taonga Pūoro were an integral part of social rituals, healing rituals, and rituals of encounter. Their sounds could be misinterpreted. When the Dutch explorer Abel Tasman (1603-59) arrived in Murderers Bay, local Māori issued a challenge through a conch shell. Tasman replied with a friendly bugle call, but Māori interpreted it as an invitation to fight.
This photograph, taken by Te Papa photographer Michael Hall, shows musicians at a workshop on taonga Pūoro, held in the museum in May 1998.