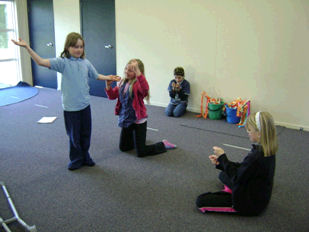 It was so moving to see the children performing the stories I knew so well. It brought tears to my eyes.

This project involved the school working collaboratively with members of the community who were establishing an exhibition of photographs and artefacts that represented the history of the local environment of Waihola and the Taieri. They created a "living museum" using process drama to explore, develop and retell the stories. The children and older generations came together to share stories and develop an increased understanding of each other, and of the past, present and potential future of the people of Waihola community.

To further inform the project, community artists working on the photographic exhibition came to speak to the students about their project and shared many photographs, stories and artifacts. This session provided the material for the process drama investigation of the history of the area. After two weeks a further speaker came into the school - an historian who documented the Polish immigration into the area, being a major part in the development of the Waihola history.

Between sessions with Evelyn, students researched information and stories largely through the internet. This research material added to the development of the drama work.

For the artist, Evelyn Mann, there were challenges in bringing the whole school together in terms of the variation in age groups and in achieving a high standard of work. This was achieved with delightful role work within the junior group, their favourite piece at the time being the portrayal of a wedding. For the seniors there was an expectation that they would develop some understanding of symbolic or abstract work within the drama. The goal was to achieve a mix of realism or naturalism combined with some symbolic work. Once the symbolic work was underway the students took to it with great enthusiasm and this became a favourite aspect of the work for the artist.

Writing in role was a powerful tool in bringing the script together. The students worked ably with voice-work, making it audible and clear. They took direction readily allowing the artist to challenge them in their notions of what a performance is and then to extend their undertanding of this conceptual framework in their own work.

It was a great experience and we got to perform an amazing person like iin Charlotte's story.

I really enjoyed doing drama with Evelyn and finding out about the history of Waihola. I was nervous and excited at the start. After I felt really happy because I had done it.

I liked all the costumes we got to wear cause it helped us get into the theme.

The most important thing to me was learning about how important it was to learn about Charlotte Gladstone and doing a drama performance about what happened in Waihola.

The impact for me was learning about the history and to act how people were feeling in those days.

I felt a new feeling that I'd never felt before. It was in the dream, I felt sensational.

It was amazing cause I got a big part in it.

I was nervous at the start (of the performance) cause there was going to be quite a few people there. I felt very proud and felt good that I had done it.

Literacy : A considerable amount of writing was generated throughout the process. A lot of this was drawn together to become the script. Much of the writing was done in role. It captured the feelings of people and atmosphere of events powerfully.

The writing in role from the students was compared with pieces of script taken directly from diaries and newspaper reports of the time and interesting discussions were undertaken about words used between then and now.

A variety of research sources were used, for example, the Polish historian who came to speak with the students provided a large amount of written material and websites. Students Googled further information, researched details from books and drew ideas from oral tellings of stories.

Social Sciences: The students gained an understanding of how the Waihola community came to be, the cultures that made up the area, and the way the use of land has been developed over time. They were able to compare with the people of the area today and acknowledge the mark the early people left on the area. They learned about the development of transport in the area by sea, land and rail. Comparisons were made with the Waihola of the early 20th Century and the Waihola of today.

The school community was brought together with the wider community through the organisation of the photographic exhibition and also with the Polish Society based in Dunedin. Links were established between people and relationships discovered and developed. The two events, the photographic exhibition and the production performance were only days apart and photos were moved from one location to the other to help make links and extend knowledge and understanding for the students, community members and the school community.

All four strands of the Drama Curriculum were encompassed through the learning activities that students engaged with during this project. As an outcome of the project, students were challenged in their beliefs about theatre and its presentation as the performance took place in the round with all students in the performance space most of the time. Using a variety of conventions in the performance, the students experienced abstract symbolic work, learned to chorus work with symbolic movement and chant, devised scenes, developed scripting knowledge through diary writing, improvised scenes, created soundscapes and tableaux while working in a variety of roles. They learned to adapt ideas that they had gathered from authentic sources such as newspapers, and to make these come alive in their own interpretive work.

Key Competencies Participating and contributing: The students developed their production with a consultation, information and resource gathering process involving members of the local community, the local Polish Society, and in conjunction with the setting up of the photographic exhibition.

Relating to others: Within the process students were working collaboratively to devise drama work and this required working together in discussion, trialling ideas, reflecting on both the content and the work and refining the work.

Using language, symbol and texts: As the process drama developed, students were constantly creating and interpreting symbols within the work created. The work itself was a co-constructed communication of their understanding of important aspects of the local history.

Process drama was a powerful tool in maintaining impetus in the work over the six weeks. The production only revealed some of the learning that had taken place. Stories for the production were drawn from student, teacher and artist's choices. Because of the many ways drama can be used to develop the production and unpack learning, it would be valuable for these students to do this again in a different context.