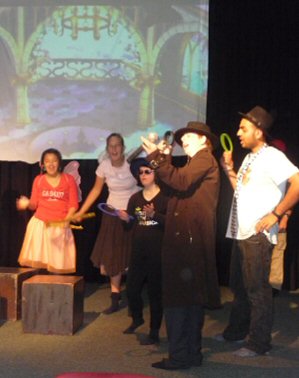 ...the lights came up on Star-Snapped, devised and performed by the Pegasus Unit and directed by Nicole Jorgensen. The Drama Room was decked out in fairy lights and a two metre tall polystyrene Eiffel tower constructed especially for the performance. The night was a huge success with both students and audience thoroughly enjoying themselves. (Pakuranga College School Newsletter)

Over 300 students at Pakuranga College were involved in the wider Artists in Schools project and had the opportunity of working with professional actor Nicole Jorgensen during the ten week residency. Senior Drama, Dance and English students worked to devise a play and included students from the Pegasus Special Needs Unit. One of the main thrusts of the project was an acting master class that took place once a week after school to extend the students' range of acting skills in devising, use of voice, physical theatre, Laban, Stanislavski and character development.

The project raised the profile of the performing arts in the school with some of the master classes being open to a variety of students enabling them to broaden their skills and knowledge bases. Dance students involved in this project were introduced to character development and extended their understanding of Laban movement techniques. English students enhanced their knowledge of Elizabethan Theatre through rhyming activities illustrating iambic pentameter and the incorporation of clues in the text.

An open acting master class workshop was also held for the school community, illustrating the acting process through short scenes.

A diverse range of separate workshops were held so that a variety of students had the experience of working with Nicole Jorgensen. All Drama and Dance classes from year 9 to year 13 spent a week working with Nicole. Each workshop was tailored to suit the particular class and year group. In Drama students learned a range of professional acting skills, from voice and script analysis techniques, to character development activities. Dance students were introduced to Drama techniques to help them focus on developing characterisation, mood and story in Dance.

Through these workshops I have gained a greater understanding into creating "off the cuff" characters. This will help me develop more interesting personalities, which I can use in both scripted and improvised work.

I have learnt lots of new skills that will help me be more convincing on the stage.

I've learnt how to incorporate drama and acting into dance movements. This workshop will help me to put more expression into my dancing.

I learnt how to express dance more effectively by using different emotions and styles. It has helped me broaden my choreographic ideas. 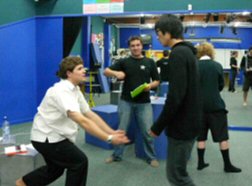 Acting master class students were extended with advanced character, script and acting technique workshops. In the final four weeks of the project three other 'guest' acting tutors were invited to join the class. This provided the students with an opportunity to see how other professional actors work and also created an ideal learning ratio of two students per tutor. The master classes provided students with an intensive 2-hour class every week.

I saw tremendous growth in all these students in that ten-week period and would love to see what they and I could achieve over a whole year of these classes!

I really enjoyed working with 'actual' actors, as most of the time my only interaction with them is in the theatre. Being able to work with them meant I was able to comprehend their thought patterns and how they overcome problems. 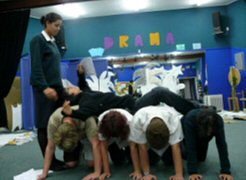 The Pegasus Unit started their project with a workshop to stimulate their imaginations and develop their confidence through character and improvisation exercises. This formed the basis for the creation of the play Star-Snapped with the students brainstorming characters and ideas. The collection of ideas and characters were formulated into a basic script by Nicole. Students and the artist then collaborated together to devise the final play around this base script while also creating set, props and costumes.

For a group with such diverse needs and cultural backgrounds, Star-Snapped - written by Nicole - became the basis for their school day. I saw a huge increase in every student in self-esteem, self-confidence, speaking out clearly, in offering suggestions and helping each other out. They were motivated and excited. Nicole had a knack for being firm but fair, concentrating on what needed to be done and students were soon aware of their contribution being valued. She went with the flow and could adapt and be flexible. With her patience, sense of humour and understanding all students responded beyond expectations.

Through the master classes students developed and extended their skills in the use of voice, physical theatre, devising, Laban, Stanislavski and character development. All of the students developed their creative skills, confidence and belief-in-self while gaining a deeper understanding of their subject viewing it from a different perspective.

The Pegasus Unit further enhanced their positive profile within the school and students developed their self- esteem from putting on a production where they were responsible for not only acting but creating the set, props and costumes as well.

She was very excited with her role and I think the play gave her confidence. I was pleasantly surprised when she performed her part and said her lines loudly. These types of activities should happen often, as they can enhance children's self-esteem and they have the opportunity to relate with others too.

It was fun being a bad guy. Mum and Dad and my sister enjoyed my acting. Miss Jorgensen is a good drama teacher. I was excited to act in front of the audience.

Values : By taking part in the various activities in the project students demonstrated innovation, inquiry, and curiosity by thinking critically, creatively, and reflectively. The participation of the Pegasus Unit students allowed the wider school population to perceive how diversity and equity can exist in a community

Key Competencies : As well as creative and critical thinking skills, students needed to use language, symbols and text in the formation of their performances. Being able to positively and constructively relate to others while participating in a group performance are also necessary skills the students developed.

All four strands of Drama were integrated: Understanding Drama in Context; Developing Practical Knowledge; Developing Ideas; Communicating and Interpreting, as students explored how new techniques and skills could be applied to their own development as performing arts practitioners - as actors, writers, directors and technicians.

Dance students also benefited from workshops which enabled them to develop their practical knowledge.

This project brought the theatre industry into the school community and enabled the students to work with professionals from the performing arts. They were able to gain a wider understanding of the industry and give value to those people who are but images on the stage or screen.

This project has most importantly inspired me and reinforced my belief in my own ability as an actor. As the acting industry can be very fickle and work is often hard to come by, one needs to have this belief to survive and keep the passion alive. This project has inspired me and opened my eyes to new ways of using my skills. I had to find my own way of passing on my skills, find ways of translating and transforming them to a level for high school students. This project has built up my own confidence and creativity and with the teaching experience I have gained I now look for further opportunities like this one.

This project has been very beneficial for students as they were able to explore without the pressure of an assessment as the 'conclusion'. During the ten weeks, Nicole specifically focused on the journey rather than on an end performance. In this way the project gave them the freedom to learn as they experimented. Nicole was able to reach a huge number and variety of students by implementing acting techniques into all the classes, tailoring them to the year level and to suit the subject.

The Artist in Schools Programme was a very successful experience for both Pakuranga College and myself. It provided us with the opportunity to try out a new Arts programme and reach a huge number of students. In 2010 and beyond, we hope to work together again to continue running Acting workshops, in particular the Acting Master class and Drama workshops with the Pegasus Unit.