This programme at Christchurch Boys' High School was a great success. Jeremy's intensive involvement in the school music department over two terms enabled him to establish a percussion tradition where none previously existed, drawing in the majority of senior music students and many juniors. (Don Whelan, HOD, Music, Christchurch Boys' High School)

Prior to this project, Christchurch Boys' High School had a strong concert band, jazz band and dixie band, with a promising orchestra and a number of ensembles and rock bands. Among the 1350 boys who attend the school there are significant numbers of Korean, Sāmoan and Māori students with a real enthusiasm for drumming, percussion and creative activity.

Jeremy Thin, percussionist with Christchurch Symphony Orchestra and Pandemonium and well-established teacher and mentor in Christchurch,, was given the task of building up the role of percussion in the school through tuition, inspiration and performance. 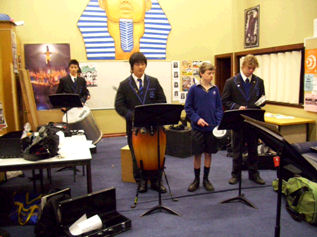 Solo performance: Jeremy studied and performed new music, including one major work (Ney Rosauro Vibraphone Concerto ), and presented this at a senior solo assessment evening towards the end of Term 3. This contributed towards his own artistic development, and enabled him to share the creative process with students through a performance workshop and open rehearsal whilst he was learning the music.

Percussion Ensemble: This group, re-established when Jeremy became itinerant percussion tutor at the school in mid-2008, expanded to about twelve core members and greatly advanced in ability thanks to more intensive tuition. Most members are not percussionists but do play other instruments. With the addition of another ten or so senior musicians, the group formed a samba band and performed Who Samba, composed by Jeremy for the project, at a combined Boys' High/Girls' High music concert and the Big Night Out concert in Term 3 2009. Many of the members of this group have subsequently joined the Christchurch School of Music Samba Band to perform with this group at community events and concerts over the summer of 2010. 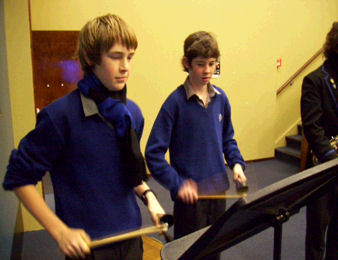 Log Drum Group: This group was formed for a period of six weeks in Term 3. It was made up mostly of junior students recruited from an assembly. No Pasifika students joined, as was the original hope. However, the majority had not previously performed music, and so the group still fulfilled its intended function of reaching outside the music department to involve the wider school in the residency. The group performed in an assembly and at the Big Night Out in Term 4 2009.

Other large music groups: Members of the percussion ensemble worked with the concert band, jazz band and orchestra to perform percussion-feature pieces at the inter-school Concert Band Festival, Jazz Quest and Orchestra Festival competitions. This was particularly successful in building strong percussion sections for these groups that will stay together beyond the project, as most students were from year 9, 10 and 11. The concert band percussion section won Best Percussion Section at the Concert Band Festival and assisted the band in winning a gold award.

Classroom work: Jeremy spent twelve periods each with the year 11 (Term 2) and year 12 (Term 3) NCEA music classes, taking them through study units on Pandemonium's Smellin' of Stomp and John Psathas' View From Olympus, both percussion-centred works. He also assisted music staff, Kate O'Connell and Don Whelan, in assessing the written projects that resulted from these units.

Support was provided for junior and NCEA students with intensive teaching and learning in one percussion based piece, View from Olympus John Psathas . As New Zealand works, these compositions were ideal for both practical and research study for performance.

Technical proficiency on percussion instruments was greatly enhanced and participants who played other instruments gained some new perspectives on their main instrument and had the opportunity to improve their ensemble techniques.

Students who have not previously been involved as performers had a wonderful musical experience that exposed them to the joy of music-making.

Students involved in this project developed a new awareness of the music of other cultures and the role music has to play in those cultures' traditions.

The artist, Jeremy Thin, involved himself fully in the life of the school. For example, he was guest judge for a round of the Quest - Christchurch Boys' High School's talent quest. The groups he worked with performed at six major school concerts across the two terms in addition to Jeremy's performance at the solo assessment evening. The project concluded with a discussion/seminar on the final day of term looking at issues rrelated to the practical life of a working musician. This was attended by many senior and junior musicians and staff.

Personally, I benefited from the project by being able to develop my personal artistry in composition and solo performance, tutoring and mentoring musicians of all kinds in large and small groups, as well as getting a taste of classroomteaching and the life of a successful music department. I greatly enjoyed the project and am grateful to the CBHS Music staff, Don Whelan and Kate O'Connell, as well as the Itinerant Music Teachers, for their encouragement and support to apply for the programme and then to make it so successful.

Each of the Achievement Objectives from the Music - Sound Arts area of the NZ Curriculum, Understanding in Context, Developing Practical Knowledge, Developing Ideas and Communicating and Interpreting were foundational to this project. By exploring and performing the percussion music of different cultures that are represented at the school, students engaged in the musical life of the school and with their cultural peers. Students worked collaboratively with the artist to express themselves through playing percussion music and, in the process, learned about different cultures through their music. The knowledge gained will foster life-long enjoyment and understanding of music of different cultures.

The application of all key competencies was evident throughout. Students were fully involved and engaged in the process using creative processes to make decisions and shape their actions. In many cases learning was done through aural cues and repetition. In the ensemble playing they were required to work together, listen to each other (Participating and Contributing) and share ideas and opinions (Relating to Others). Music scores were read and interpreted where appropriate (Using language, symbols and texts) and students set themselves some very clear goals to work towards (Managing Self).

With so many students having been involved in the project, the legacy of the residency will allow a much larger focus on percussion within the school music programme. Some may not perform as percussionists again, but their musical experience has been enriched by their involvement. Jeremy intends to continue his ongoing tuition of the Percussion Ensemble.

The performance workshops and practical music seminars will continue as occasional events within the school music calendar, presented by outside musicians of differing backgrounds and styles, so as to appeal to all emerging musicians at the school and enrich their musical education.