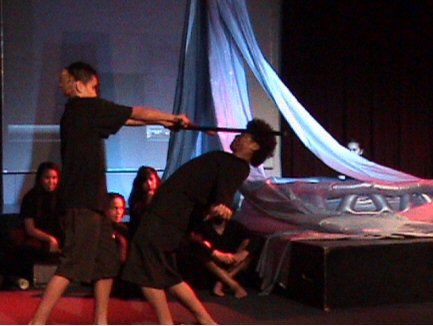 Wounded warriors were taken to Otuihau

Wounded warriors were taken to Otuihau

This Artists in Schools 2009 project focused on a local area of significance to Tikipunga High School - Otuihau, more commonly referred to as Whangarei Falls. This iconic landmark was at the heart of students' exploration of the historic significance and human interaction with the local environment.

The project was planned by Lilicherie McGregor in consultation with the Head of English (Bob Davidson) at Tikipunga High. The project was completed under the guidance and assistance of Michele Wellington (teacher), Liz Kirkman (actress, acting teacher) and Giles McNeil (filmmaker, musician).

The project began by addressing Māori tikanga - a blessing took place to acknowledge tapu and those who have lost their lives at the Falls. Students then explored the history surrounding Otuihau and how people have viewed and occupied the place over time.

Students were given a range of ideas as topics for enquiry about the area including, stories about World War I and II, the flu epidemic and a place of healing for Māori injured in battle (Ngunguru Sand-spit). Background research such as stories and anecdotes were developed into scripts, poetry, and visual representations using mime, role-play and improvisations to tell stories.

Students consulted local archives and interviewed people (including local kuia and kaumātua) on film. Each interview was written up as a story with drawings, photographs and animations to illustrate the interviews for the exhibition at the end of the project. Māori myths linked acts in the story-telling production. An extensive range of skills were gained by the students surrounding the production of a dramatic work. Skills gained by students ranged from script-writing and costume design, to documentation of the project including animation and video diaries.

All of the developmental work was positively embraced by students and resulted in a growth of students' levels of self-belief. Newfound confidence allowed them to develop meaningful relationships with each other, the artists and the local community. The students took ownership of their learning, were able to plan ahead and spent a lot of time at Otuihau -'a big plus for them being out of the classroom'.

Students developed their skills in acting, script writing and costume design. They were also introduced to a wide range of skills relevant to the project including; animation, filming, interviewing and making a video diary to document work in progress. They learned technichal skills with camera work, stop-motion animation and sound operation. Their literacy was enhanced as they learned how to craft oral histories.

More importantly students gained a greater level of confidence and understanding of interpersonal relationships. They learned to work as an ensemble and listen to each other, to value people as resources, co-operation, and team-work in the production of a show. The performative work opened them to receiving more information in other subject areas such as geography, maths, science and history. This approach was continued by the teacher Michele Wellington as students became totally engaged in their learning as well as having fun. 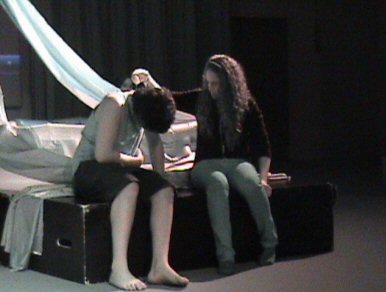 A mother came in to the class one day saying she just had to see what was going on. Her son was so full of what he was doing at school and so desperate to get to school each day.

We were able to integrate learning across the curriculum and to move out of the classroom ... learning from experts in their fields and inviting people from the community to be part of the learning. Students grew in terms of learning and social awareness, benefiting from the relationships forged with the artists and the community members.

Students were encouraged to 'express human experience' through the creation of their scripts and performance while examining attitudes and values towards a significant local site by people over time - reflecting and enriching the cultural life of their schools, whanau, and communities.

All four strands of Drama were integrated during the course of the project: Understanding Drama in Context; Developing Practical Knowledge by using techniques, conventions, and relevant technologies to create works about Otuihau; Developing Ideas for specific purposes such as creating movements based on water, eels, fish, birds, trees, wind, and clouds by observing and abstracting; Communicating and Interpreting about their own and others' work during the project.

Some strands were incorporated through the creation of drawings, paintings and weaving kete as well as costume/prop design and creation (PK, DI, UC).

In addition to learning about skills specific to Drama this project provided a powerful platform for interpersonal development by developing 'connected' learners who could communicate and relate well to others and felt they were members of a community.

Key competencies were also developed through relating to others and participating and contributing to a collaborative, group project.

English: During the course of their background research students made 'meaning of ideas or information' and then embarked on creating meaning for others through scriptwriting by shaping 'text for an audience using language' and drama features.

Social Sciences - Place and Environment: Students learned about 'how people perceive... and interact with places and environments' including environmental issues and tourism, gaining an understanding of 'the relationships that exist between people and the environment'.

Science: The Living World was an essential part of students' research and learning about the geology of the area, the flora and fauna, as well as more specific knowledge about water itself such as gravity, positive/negative ions.

The underlying concept of Hauora Health and Physical Education was considered throughout the project when considering the relationship between people and their environment with special regard to M�ori medicine, for example in relation to healing plants and the roles of water and minerals.

Effective pedagogy ensured that ICT was used for the appropriate purposes including, designing pamphlets, researching online, typing up stories with further possibilities to create flyers from the stories, for tourists at the local Information Centre.

The project finale was a celebration of the work presented to the school, peers, whänau and community.

We showed our films, recited written work, acted scenes from history, and generally told the history of Otuihau to the invited audience.

...this project allowed me to explore integration of learning with the help of outside professionals (the artists) and also to 'let go of' the timetable. We did not have to 'do Maths' or the like at specific times or in one hour blocks. The timetable, on occasions when we did not have two uninterrupted hours in a row, became a hindrance, as were 'school activities' and/or unplanned interruptions to the school day. Everyone was engaged and focused on the work.'

After the end of the project we expanded on and carried on learning about 'Our Place - Aotearoa' over the next term so the students did not lose the skills they had developed for this project. If I could teach students in this way all year, I think the benefits for their achievement would be huge. I encourage other teachers to give it a go. The rewards for students and teachers are amazing.