Kids Save the World 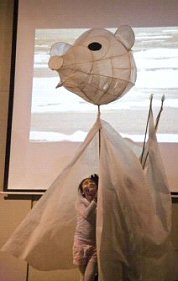 Hay Park School has a long tradition of cultural performance. Since 1997, it has held a cultural festival each year with a strong competitive aspect. It has been an aim to shift away from the competitive process and to move to a school-wide collaborative process using the performing arts and an integrated learning theme. Journey to Our Shores in 2008 began the process which was continued in 2009 with Kids Save the World.

The artist, Kate Parker, is multi-talented in the arts. She choreographs dances, writes scripts, produces, paints backgrounds, makes props and puppets. Hay Park School staff and students were very encouraged by this young facilitator and the collaboration of highly valued.

The theme of Kids Save the World is conservation. The story revolves around an evil queen who has the greatest desire to turn the world into plastic. She is supported by a few characters in her venture. The main message of the production was delivered by a professor and a superhero, who showed the need to look after our planet. The music and dance was creatively crafted around this theme. 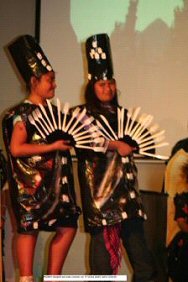 Kids Save the World was a school production that involved each and every student at Hay Park School. Preparation for the production began with a dance, acting and art workshop.

Auditions for acting roles took place early in the third term, followed by work on the script later on in the term. Dance choreography, props and costume making were mostly completed by the end of term.

The students gained considerable confidence in their abilities and attributes. They experienced many styles and forms of dance, developed expertise in the ukulele and worked on large sized mural, masks and props through a highly enjoyable range of learning experiences.

This project promoted creative and cultural dance, playing the ukulele and singing along, as well as the development of stage presence for many students and teachers alike. The cross-discipline nature of the learning context allowed for holistic practices to be experienced in relevant, culturally rich, and creative ways.

The project provided a number of strongly positive outcomes for the school. It engaged all 196 students who participated enthusiastically. Around 500 members of the school community attended the productions and parents watched and supported with pride. They saw their children 'shine'. The work engaged the teachers in a huge learning curve about the positive aspects of learning through the performing arts. Teachers gained skills in teaching dance and drama and gained insight into what the children can achieve when high standards are set. Kate, the artist, set the expectation of a polished performance as one of the key outcomes of the holistic learning process. 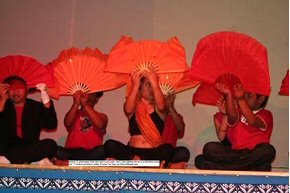 Teachers were able to develop an idea with the students and the support of an artist and see their ideas taken through to performance level. The positive support and 'can do' attitude of Kate Parker encouraged teachers to give things a go that they would normally not do. Teachers had an opportunity to upskill and reflect on their learning through professional discussions with Kate. In this way teacher professional learning was a key strength of this project.

Teachers saw that a school production could be devised, that is, worked from the 'ground up' with the students. The students' voices and ideas were valued by Kate and the production was based on their learning rather than being based on a story imposed on them and beyond their experience.

Working cooperatively with other students, sharing ideas, talents, connecting and contributing as group members in a supportive learning environment gave opportunities to experience a team culture.

In 2008 the school initiated a School Production that was linked with our unit of study "Migration". All the students in the school participated in the one night production, "Journey to Our Shores". This inspired us to develop the idea in 2009, to grow to a two night whole school production. The production, which was based on our school wide conservation theme, was scripted by a group of students under the guidance of Kate. The balance between dance, music and drama was exceptional. (Teacher)

The focus for Hay Park School in 2009 was on introducing and developing the key competencies set out in the New Zealand Curriculum.

The production supported this focus in the following ways:

The children were thinking as they considered the important message about conservation they wanted to share, as they learnt the words to the songs and their lines for the production. They were encouraged to be creative, drawing on their own experiences to contribute to the production's story-line and format.

They were using language, symbols and texts as they read their scripts, learned some ukulele chords and researched ideas to contribute to the production.

They were managing self as they made plans for their involvement, attended rehearsals punctually and with enthusiasm and overcame the challenges the process threw in their paths.

They were relating to others as they interacted with the artist, the staff and each other, they listened and negotiated where necessary. The children were encouraged to be open to new learning and to share ideas and opinions constructively.

They were participating and contributing as they were actively involved in the whole process from auditions to final performance and the creation of costumes, sets and props. There was a wonderful cameraderie with the older children mentoring and caring for the little ones and a strong sense of achievement and belonging. 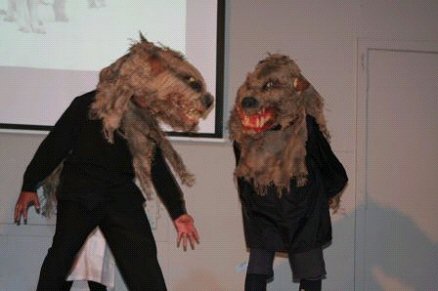 Wolves - servants of the enemy

Wolves - servants of the enemy

The aim of presenting a production that had strong students input, was non-competitive and involved every child in the school, was fully met. The school and community are encouraged and upskilled sufficiently to take another important global or local issue and create a similar production in the future.