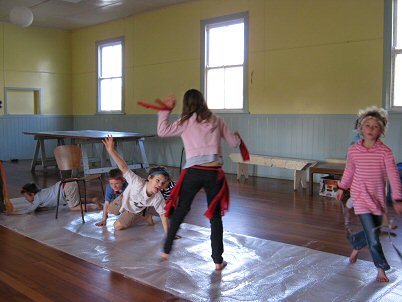 The rats attack the mother bird

The rats attack the mother bird

Pakiri is a small area school with a roll of fifteen students who all took part in this project to create an environmentally-themed performance related to their special relationship with Pakiri Beach. The artist Deneiece Gannaway is the producer for the Magic Earth Theatre Society which aims to foster environmental awareness through the medium of dance, drama and stagecraft. This pairing of artists and school who both share similar environmental concerns led to a rich and meaningful experience for young students.

The students already have a relationship with Pakiri Beach, which is approximately three kilometres from the school gate. They have participated previously in projects such as regenerative planting for the beach and creating signs in conjunction with the Department of Conservation warning visitors to be careful of the nesting sites of the dotterels, fairy terns and oyster catchers. They are very aware how fragile this eco-system is and decided to be the voice for the birds because they cannot speak for themselves. 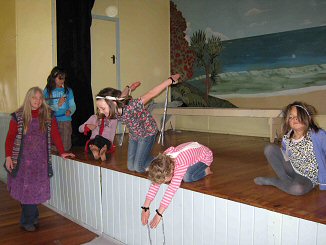 Twice a week students had two-hour blocks of time devoted to the project. During these sessions Suzanne would work with the half of the group organising the costumes and props as the children were encouraged to design their own costumes and make the props required for the show.

Deniece focused on developing the storyline with students to create a cohesive production. Her time was divided into sections where she would either work with the remaining half of the class or the whole group. A lot of attention was given to the purpose of this project and to the development of drama and movement skills within the class.

The process used in the project was interactive and child-centred. It gave each child an opportunity to explore the agreed environmental issue - the impact of people near the dotterel nesting site. It was the children who led the development of the performance from the beginning. Deniece saw her function as a facilitator, providing the means to assist the students to bring their ideas to life. The children were encouraged to explore, collate and analyse their research. They then translated this into a story which, after long and rigorous discussion was turned into a script and finally culminated in their performance.

Everything was done in a collaborative way. As well as devising their own drama and dance pieces, students were encouraged to design their own costumes and props. They also built the high glow, fish stick puppets used in the performance. A highlight was the construction of a hut on the stage from natural materials found in the environment such as driftwood and flax flower-stems.

The public performances were held in the local hall before a keen audience of parents and community members.

Students had an opportunity to learn new skills in dance and the artists found the students 'wonderful to work with'. They were willing to accept the challenges required to achieve success. Deniece used a series of drama games to integrate the group introducing the concept of creative movement in a student-centered method. This allowed the children to develop their own themes and arrive at their own conclusions as to how to express their chosen character through movement.

On the night of the final performance the artist said she was amazed at how beautifully the children expressed themselves.

The children supported me in this creative development and at times came up with better solutions than I could have planned and were at times very good at keeping the story together, and introducing new and wonderful ideas.

The Head Teacher of Pakiri School was very supportive and contributed to the project through dance and creating the songs for the show.

The objectives of the project were definitely accomplished. The children's awareness of their local environment was enhanced. They developed skills of observation, research and collating information with an innovative and unusual result - the opportunity to express the gathered information through storytelling, music and dance. The children learned some valuable personal skills throughout the process as well, working in a non-competitive way and being resourceful.

Students gained practical Knowledge (PK) in the Visual arts by creating costumes, props and puppets on sticks that were covered in papier mache then decorated and painted with fluorescent paint as 'glow-fish'.

The students explored techniques and developed ideas in Music - Sound Arts when creating the soundtrack as they communicated meaning through sound effects. They also made creative decisions through the process of choosing music. The sound effects and music were made into a soundtrack. The students sang, and in so doing developed their practical knowledge and the skills of communicating and interpreting music (CI) within a rich learning context (UC).

In addition to learning about skills specific to Drama and Dance, this project allowed students to be actively involved in environmental issues faced by their community , and to support a focus of their school vision - to work towards protecting the flora and fauna of their local environment as a sustainability project.

Key competencies were also developed through relating to others and participating and contributing to a collaborative, group project.

Science: The Living World strand was integral to this project as students had a prior interest in the impact of humans on Pakiri Beach. As a result, they are able to make more informed decisions about biological issues, in this case to protect some of New Zealand's unique fauna and flora.

Social Sciences: Place and Environment strand was linked by developing ideas about environmental issues gaining an understanding of the relationships between people and the environment.

The community was involved in the project development. Every family helped in some way with the organisation. Partnerships between home and school have developed as a result of the experience. And the children can now be 'watchdogs' for the local environment.

Because we are a small community and a small school we don't often have an opportunity such as this present itself. The school has access to the local hall, which is rarely used so there was no difficulty in setting up there for the duration of the term and using it for rehearsals when we wanted.

The strengths of the project were that everyone worked together towards the production. Deniece was very accepting of any suggestions that the children had, and was quite determined that this should be their show and that they should be responsible for creating the storyline, script etc. This, in turn, meant that the children felt listened to, and they all felt as if they had ownership of the show. All children were at all times motivated and enthusiastic.