Chisnallwood Intermediate School is a Decile 5 intermediate school organised as a middle school with nearly 900 students and over 80 full and part-time staff. It is located in the eastern suburbs of Christchurch. Chisnallwood has a heavy emphasis on academic development, and a wide range of activities in the sport, music, cultural and specialist fields. The majority of students, seventy per cent, are NZ European. Nineteen per cent of the student population identify themselves as Māori.

The school's curriculum is designed to ensure that children are well prepared to move on to their secondary education and the school has a reputation for being innovative and progressive. It is particularly recognised for its success in music. The Chisnallwood Performing Arts Centre was built in 2005 to support the school's music and performing arts programme. It includes rooms for itinerant teachers, a computer music suite, recording studio, and performing and rehearsal spaces.

Truth and Dare is a short film project that year 8 students and staff at Chisnallwood undertook during 2008. Preparation for the short film began with a writing workshop and auditions for acting roles in the first term, followed by work on the script in the second term. Filming and post-production were completed during the second and third terms. This culminated in a gala opening of the film and a DVD. Key personnel involved with the project were Michael Bell - the artist, and teachers Kathy Baker and Judith Bell.

Funding for the project was provided by the Ministry of Education (Artists in Schools) and was supplemented by funding donated by the school's Board of Trustees.

The aim of Truth and Dare was for students to actively engage in the creative film making process from conception to completion. In designing the project, teachers were conscious of an authentic cross-curricular learning experience. The project encompassed and integrated the learning areas of Arts, Technology, English and Health enabling both staff and students to work collaboratively. It allowed personalised learning, and recognised and developed students' knowledge, skills, interests and abilities.

Resilience and working collaboratively were two competencies students developed during the project. For teachers, using the technical equipment, including software to edit the film, meant they were able to develop digital literacy skills and gave them the confidence and skills necessary to consider undertaking a similar project in the future.

Relationship to the New Zealand Curriculum

In 2008, the school decided to focus on the key competencies of Managing Self and Participating and Contributing. Both of these competencies underpinned the process and learning context of the project. Establishing and reviewing personal goals, project management and achieving high standards were key attributes that the students needed to develop in order to realise the potential of the project. Working with others - connecting and contributing as group members, and supporting and creating opportunities for others enabled a team culture, where everyone takes on responsibility and sees things through. This project promoted creativity, energy and enterprise. 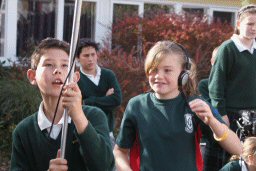 The theme of Truth and Dare is bullying. The story revolves around a group of five cool students who convince a new girl to steal and make public, the diary of a boy considered 'un-cool'. In the end, the new girl apologises to the boy and they walk off home together with their own friends.

Making a film is a big undertaking and various roles were assigned to teachers and students. The roles of producer and director were undertaken by the artist, Michael Bell. Teacher, Sarah Robertson was co-director. The artist and teachers assisted students who took on the roles of the writers, actors, editors, camera operators, lighting designers, sound designer, boom operator, Foley and ADR artists, audio mixer, technical assistants/gaffers, visual effects, composers, and coordinating the marketing/movie premiere.

The art department were responsible for the props, wardrobe, set, credit design, poster advertising the film, photography, DVD slick, label and menu. Teachers led the make-up, hair stylists and catering team, and the music teacher assisted students and composed some of the film score for the school orchestra to record. 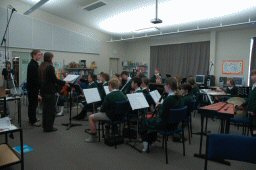 Over 200 students and staff were involved with the creation of the seven-minute short film. In a newsletter to parents, the Principal wrote that 'this project illustrates what can be achieved when boundaries are removed, where resourcing matches enthusiasm and where attitude is paramount.'

Around five hundred people attended the premiere of Truth and Dare at Reading Cinema at The Palms in Christchurch. The school jazz band opened the event and the audience rapturously received the film. In particular, the bloopers that were caught whilst filming provided some humorous moments and a source of embarrassment for some. At the closure of the evening, artist/film producer, Michael Bell, and Judith Bell, music teacher, presented 'Oscar' awards to the students that had made an outstanding contribution to the film.

For teachers the benefits of the project were immense. They were able to apply prior knowledge and gain new skills that will improve opportunities for students and student learning in the future. They developed confidence in their work and learned to trust their students throughout a creative process. Setting high expectations provided some surprises for teachers as they learned that students could often do more than they thought they could! 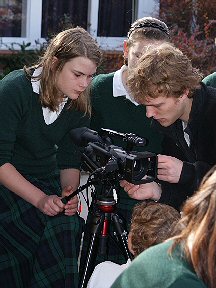 Students learned that the process of making a film is multi-layered and perhaps not as glamorous as they might have thought. Commenting on the filming, a student noted that 'It takes ages to get the shot perfect. You've just got to try as hard as you can - it might take forever, but the outcome is worth it.' Another student noted that 'it's not easy to make a film ... like I thought you just turned the camera on and then the film's done, but you have to do other things. It's actually quite hard to do.' Students were given the opportunity and the responsibility to take ownership of the project. As one student said 'I like the responsibility in it, that it's all student-orientated, and it's not like the teachers aren't in charge of every single thing we do... sometimes it's left up to all the students.' This required them to show commitment and resilience to see the project through.

Students became the teachers - sharing new knowledge with their peers and their teachers. They also learned and related media knowledge in an authentic context - the planning, discussion, evaluating and critiquing were integral to the collaborative process. Working with the artist was crucial to the success of the project. One student noted that the artist saw 'things in a way that teachers wouldn't normally see them, and he specialises in movie making, whilst the teachers specialise in teaching and also, since he's not a teacher, the average student would felt a bit more comfortable around him.' Another observed that he was 'kind of like an oversized kid, because how he knows how we [the students] all think ... he's like an invisible helper.'

Making the movie involved many practical tasks. Learning by doing is a theme that the students commented on. As one student said, 'It's something you enjoy doing, it's hands on. If a teacher walks into the classroom and says "OK we're going to learn about movie making, " writes up all the parts of movie making and spend a term learning the theory of how to do it, but you don't actually go out and do it, you don't learn much.'

Most importantly, the students learned future-focused life-long skills that won't outgrow expanding possible career pathways. A student reflecting on skills learned stated 'I've learned that script-writing is kinda quite fun and that's a new thing for me and I think it also developed some new things in writing - I think it's improved my writing skills like I learned a lot of things that I think I can use in the future.'

The film gave the school community an insight into the challenges that can be mastered with this type of project and resourcing. Parents were very supportive and involved in the entire project. They appreciated the new skills that the students learned and were thrilled with the final outcome. They were very proud of their children's achievements and the school received tremendous verbal and written feedback throughout the process and after the gala opening.